The first three gardens below are, like Dirleton Village Association, local charities, and as the DVA constitution encourages members ‘to co-operate with other bodies having similar interests,’ a visit to one of these delightful gardens becomes a very pleasant civic duty!

Amisfield Walled Garden
is run by the Amisfield Preservation Trust
website: www.amisfield.org.uk
The garden is open to visitors from April to September: 1pm to 4pm Monday Thursday and Friday, 10am to 4pm Wednesday and 10am to 1pm Saturday.
Volunteer sessions are on Monday and Friday afternoons and Wednesday and Saturday mornings.
The Walled Garden was set up by the Trust in 2012 with a 99 year lease from East Lothian Council, on the condition the garden is to be developed as a community source for enjoyment and wellbeing.
The Walled Garden can be visited on foot (1 mile / 1.6km) from the Nungate area of Haddington via the road to the Golf Club, and continuing along the footpath beyond the club house. An alternative route by foot is by the path on the north bank of the river Tyne, crossing the river at the Abbey Bridge, and entering the Park by the east gate. 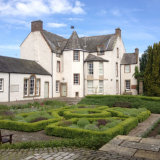 is run by the Haddington Garden Trust
website: www.haddingtongarden.com
open daily to the public: February to October 9 - 5 and November to January 9 - 3.30
There is a volunteering programme.
This garden is adjacent to Haddington House which dates from 1648, and some of the garden's boundary walls were built by Napoleonic prisoners of war.
The garden was gifted to the Trust by the 14th Duke of Hamilton in 1972, and was designed to reflect features of a 17th century Scottish garden with a mount, sunken garden, laburnum and hornbeam walks, cottage garden, orchard, meadow, period rose border and a raised herb garden full of medicinal plants - a real delight to visit.
It can be visited down a wee passage signposted near to Peter Potter's Gallery, The Sands or off Sidegate, Haddington.

Cockenzie House and Gardens
is a newly established charity, aiming to bring one of the few late 17th century manager's houses in Scotland back into community ownership.
phone: 01875 819 456
website: cockenziehouseandgardens.com
open daily from 10 - 4. There is a Secret Garden Tearoom run by Falko which is open 10 - 5, but closed Mondays and Tuesdays.
There are a series of events held here - see our Events Diary
address: Cockenzie House & Gardens Ltd, 22 Edinburgh Road, Cockenzie & Port Seton, EH32 0HY

Three other very worthwhile gardens nearby are:
Greywalls, Muirfield, Gullane, EH31 2EG
location: on the A198 on the edge of Gullane on the way to North Berwick
website: www.greywalls.co.uk
While this is now an upmarket hotel and restaurant, Greywall & Chez Roux Restaurant, we have confirmed that it is possible to visit the gardens without staying and eating (although the teas are rather special!).
The house was designed by Sir Edwin Lutyens in 1901 in an Edwardian Art Deco style, and although there is no direct evidence, it is quite possible that Gertrude Jekyll worked with him on the design of the garden. The garden uses walls and arched doorways to create rooms and vistas out to the surrounding countryside.

North Berwick Lodge Grounds
Lodge Grounds
The Lodge Grounds are located in the centre of North Berwick and were created in the 17th century by the Dalyrymple family. In 1939 they became a public park when North Berwick Town Council bought both the grounds and the Lodge. In 2008, the refurbished grounds were opened by Sir Hew Hamilton-Dalyrmple. Entrance to the split-level park is from Quality Street. The lower park is a formal garden with an aviary. The upper 'early Victorian' park has wide open spaces, mature trees, lavender garden, wild gardens, great views of North Berwick Law and the Bass Rock and a children's play area suitable for all abilities.

Shepherd House Garden, Inveresk, Midlothian, EH21 7TH
This garden is only open at certain times during the first part of each year, starting with a celebration of snowdrops. It usually has several weekend openings during this period as part as part of the 'Scotland's Gardens' scheme. Outwith these, it is open Tuesdays and Thursdays from 2 - 4pm from 12th April 2016 to 14 July 2016. Entrance £5. See the attractive website.

Haddington Garden Trail set up in 2016. Illustrated leaflets describing this trial are available from the John Gray Centre in Haddington. There is a short trail of one and a half miles to visit three gardens close to the town centre, and a longer four and a half mile trail to Amisfield Walled Garden. Both trails start from the centre of Haddington.