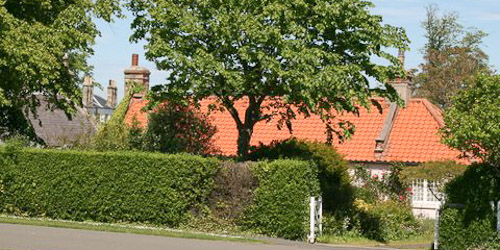 Dirleton conservation area comprises the whole of the very picturesque village with its buildings grouped around a series of open greens. Dirleton is set on and around the rocky outcrops of Dirleton Castle and Chapelhill within open generally flat arable land. Its setting includes Archerfield, its home farm and associated buildings and the planned landscape around the house. Development impinging on either the greens or the open countryside or woodland at the approaches to the village would adversely affect the Conservation Area.

Dirleton grew up around the Castle, which was built on a rocky outcrop surrounded by marshland, with the original castle-village being to the east. The Castle is now appreciated for its scenic qualities and fine open views over the surrounding area and is a popular visitor attraction.

The castle’s historic position as the main house of the area was replaced in the 17th century when Archerfield House was built to the west of castle as a more fashionable residence for more peaceful times. This 3-storey classical mansion was originally built by the Nisbet family in 1663, and ceased to be occupied after the second world war and lay derelict for many years It has recently been comprehensively restored in fine detail and is once again back in use as single house.

In the early 19th century the agricultural village was substantially improved by Lady Elgin. She laid out the village green on what had been a midden and enhanced the village by planting; the Manse overlooking the green and new cottages were built and others “beautified” by the unifying design details that are still in evidence today. These are unique to Dirleton and include the raised gable heads, diamond shaped chimney stacks and skew putts found on many of the buildings around the main village green and on the walls around the castle. Such details must be retained.

Most buildings are low density and small scale, although there are exceptions which are landmark buildings - the church and the castle, Oatfield House, Dirleton House and the Red House, built to house Estate workers. A feature of the cottages grouped to the north of the green is the extensive mature trees and gardens that allow only glimpses in to the buildings The Castle Inn facing onto the main green was designed by architect William Burn. Oatfield House is a three storey former farmhouse set back from the main housing on the green. Its setting includes the formal approach with bordering fruit trees between the house and the village. The openness of this setting is important to the house and would be harmed by development that would close this off or otherwise interfere with views of Oatfield from Dirleton.

To the east end of Dirleton buildings are also low density, generally single storey and a mix of stone and whitewashed walls. To the west are low-density cottages and houses along with the primary school, which are a mix of stone and harled buildings developed mostly in the 19th and 20th centuries.

Materials used to finish the walls of buildings in the older part of the village are almost exclusively stone. Within the eastern and western parts of the village harled exteriors are also evident. Roofs tend to be either natural slate or clay pantile. Loss of existing stone walls would harm the Conservation Area. Some boundaries particularly on to agricultural land are post and wire fencing and hedges are also used within the village.

Trees are an important part of the setting within the village particularly in the gardens to the north and west of the village. The setting to the west is dominated by the plantation woodland within Archerfield and to the east woodland at the entrance is also an important landscape feature. Throughout the village, there are mature trees many of which are protected by a Tree Preservation Order. This well landscaped character, coupled with the open greens give the village provides a feel to the village that is both open and intimate.