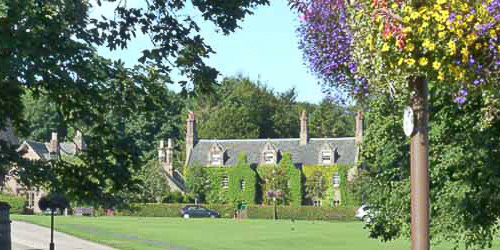 CONSTITUTION OF THE DIRLETON VILLAGE ASSOCIATION
1 Name
The name of the association shall be Dirleton Village Association.
2 Objects
The objects of the Association shall be to promote and encourage the following aims
by charitable means but not otherwise:
1. To encourage the preservation and where possible the improvement of
the character, amenity and beauty of the village and its surroundings and
features therein of historic or ecological interest.
2. To encourage high standards of architecture and planning in the area.
3. To stimulate public interest in and care for the beauty, history and
character of the village.
4. To facilitate community activities.
5. To co-operate with other bodies having similar interests.
6. To pursue these ends by means of meetings, exhibitions, lectures,
publications, other forms of communication and publicity and promotion of
schemes of a charitable nature.
3 Membership
Membership shall be open to all who are interested in the aims of the Association
whether resident in the village or not. Membership shall lapse if the subscription is
unpaid six months after it is due.
4 Subscriptions
The classification of membership and respective subscriptions and any variations
thereof shall be determined by the committee. The initial classification and annual
amounts shall be as follows:
• Individual adult member minimum £1.00
• Family membership for an individual and his or her
immediate relatives residing at the same address minimum £1.50
• Junior members, up to the age of 18,
not included in family membership minimum £0.50
• Senior citizens minimum £0.50
Family members will receive one copy of notices and will be restricted to adult votes
at a general meeting.
Subscriptions will fall due on application for membership and thereafter on the first
day of each financial accounting period.
5 Accounting Period
The Association’s financial accounting period runs annually from 1 September until
31 August following.
6 Meetings
An Annual General Meeting shall be held in or about October of each year to receive
the Committee’s Report and Independently Examined Accounts. The Committee shall
elect Office Bearers and Members of the Committee and an independent examiner
shall be appointed who shall not be a member of the Committee. The Committee shall
decide when ordinary meetings of the Association shall be held and shall give at least
seven days’ notice of such meetings to all members. Special General Meetings of the
Association shall be held at the request of five or more members and shall be called
by the Committee who shall circularise the members. Seven members personally
present shall constitute a quorum for a meeting of the Association. Junior Members
shall not be entitled to vote at a general meeting except in matters affecting junior
organisations or projects.
7 Office Bearers
Nominations for the election of Office Bearers shall be made at the Annual General
Meeting, supported by a seconder. The consent of the proposed nominees, unless
already serving or personally present, must first have been obtained in writing and,
with the nomination showing and seconder, placed in the hands of the Honorary
Secretary before the commencement of the meeting. The election of Office Bearers
shall be completed prior to the election of other members of Committee. The Office
Bearers of the Association shall consist of Chair, Honorary Secretary and Honorary
Treasurer. The Chair and Honorary Secretary shall relinquish office each year and
shall be eligible for re-election up to a total of two years: thereafter each shall be
ineligible for re-election to the same office for a period of one year.
8 Committee
The Committee shall consist of the Office Bearers and up to nine further members
elected at the Annual General Meeting. The Committee shall have power to co-opt
additional members. All shall retire annually and be eligible for re-election or cooption.
The consent of the proposed nominees for election unless already serving or
personally present must first have been obtained in writing. The nomination showing
proposer and seconder with written consent where applicable shall be placed in the
hands of the Honorary Secretary before commencement of the meeting. In addition
the representatives of Dirleton on the Community Council shall ex officio be members
of the Committee. If the nominations exceed the number of vacancies a ballot shall
take place.
The Committee shall be responsible for running the affairs of the Association and may
take decisions on its behalf. Four shall form a quorum for meetings of the Committee.
9 Appeals
The Committee shall have the power to make public appeals for funds, solicit
donations and canvas financial support for carrying out the objects of the
Association.
10 Expenses of Administration
The Committee shall out of the monies received by the Association pay all proper
expenses of administration and management of the Association and shall use the
residue of such monies as it thinks fit for or towards the objects of the Association.
11 Investment
All monies at any time belonging to the Association and exceeding normal
requirements for administration or for its objects shall be invested by the Committee
upon such investments, securities or property as it may think fit.
12 Amendments
The Constitution may be amended by a two thirds’ majority of members present at an
Annual or a Special General Meeting, provided that ten days’ notice of the proposed
amendment has been given by public display.
13 Winding–Up
In the event of winding-up of the Association the available funds of the Association
shall be transferred to such one or more charitable bodies having objects similar or
reasonably similar to those hereinbefore declared as may be chosen by the
Committee.
Adopted 21 MARCH 2018